How to manage storage changes in Google Workspace for Education

When it comes to cloud services, storage space is often taken for granted. But now that Google has announced new limitations to its storage policy, Google Workspace for Education users are scrambling to consider the implications.

But don’t worry, there’s a lot to do with cloud storage. The key to mitigating these changes is understanding exactly why Google storage is changing, how its new policy will affect your school district, and what you can do to optimize storage space in your own cloud environment.

Why Google is changing your cloud storage limit

It’s safe to say that Google’s announcement will ruffle the feathers of nearly every school district. The few districts that operate exclusively in Microsoft Office will not be affected by the change.

But the vast majority of districts — at least 83% according to EdWeek Research Center — are Google Workspace for Education customers. This means that since its initial release as Google Apps for Education (and later G Suite for Education) in 2006, many schools have become accustomed to free, unlimited cloud storage.

From July 2022, however, this will no longer be the case. Going forward, Google’s cloud storage will be limited to 100TB of data per Education customer, shared between Each Google app provided by Workspace. This means that every type of data produced in your Google Account, whether it’s a Google Doc, Google Spreadsheet, Google Chat or anything else, will now count towards this capacity.

In their initial announcement, Google explained their rationale:

In other words, it’s simply unsustainable that Google Drive offers unlimited cloud storage any longer. According to DOMO estimates, more than 2.5 quintillion bytes of data are created daily, with this figure growing exponentially. 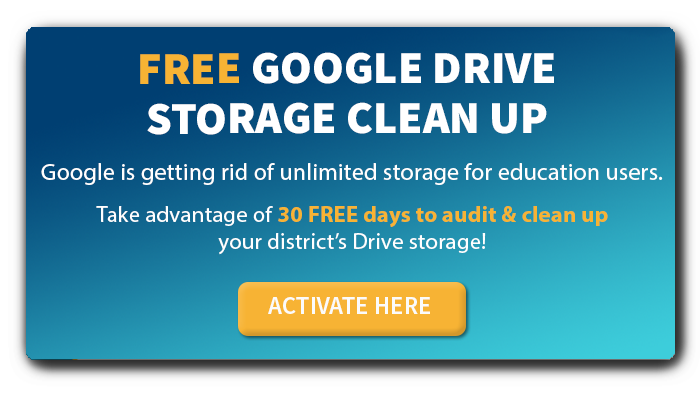 The post How to Manage Storage Changes in Google Workspace for Education appeared first on ManagedMethods.

*** This is a syndicated blog from the ManagedMethods Security Bloggers Network written by Alexa Sander. Read the original post at: https://managedmethods.com/blog/google-drive-unlimited-storage-for-education-users/

AMD Empowers the Next Generation of Leaders Through STEM Education Partnerships